skip to main | skip to sidebar

Recently I've started exploring satellite data, mainly to learn about the distribution of clouds.  The NASA Earth Observation site (NEO) is a great resource learning about the atmosphere, solar insolation, land cover and much else (there is a link at the bottom of the page).  The site has a large number of thematic world maps with various time and space resolutions.  In addition, the data behind the maps can be downloaded making it possible to extract data for a specified tile containing data for an area of interest.

For a couple of years I have been collecting soil temperatures in my back yard, I thought it would be interesting to compare surface temperatures as measured by the Terra and Aqua satellites with my observations for 2013.  The results are shown in the graph below. 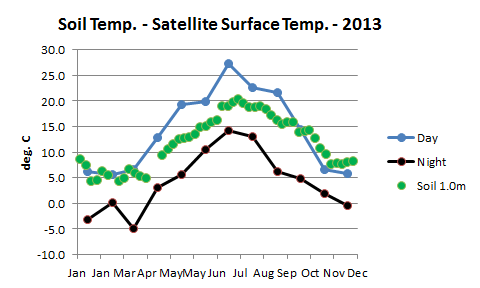 Whilst there is reasonable agreement between the two datasets, it is not a like-for-like comparison.  The most obvious difference is that the NEO data comes from a sophisticated spacecraft with massive scientific backup.  My data is derived from a hole in the ground which is protected by an empty dog food tin.  The satellite data is an "average" for a 0.1 by 0.1 degree tile (very approx. 10 by 10 km), the one which contains my back yard contains a wide range of surfaces including urban, agriculture and woodland.  The satellite builds up a picture of the Earth's surface from a series of scans rather than constant monitoring and only collects some types of data on clear days.

My hole in the ground was located to avoid the mains water supply and be accessible when when crops a growing, this could be described as a random suburban setting.  The temperature readings are usually collected around sunset on Sundays.  Soil temperature varies considerably during the day and night, the extremes take place when the sky is clear.  In summer the noon temperature can reach 30 deg. C, and in winter under a clear night sky, it can fall well below zero.  The graph below shows the variation during a spring day.  The thermal turbulence is greatest at the surface (measurements taken at 0.1m).  The temperature at 1.0m approximates to the average at 0.1m.

Soil Temperature - A Day in the Life Of

Creating a time series of electricity prices compiled from actual bills has been a back-burner project for a few years.  I recently found a ... 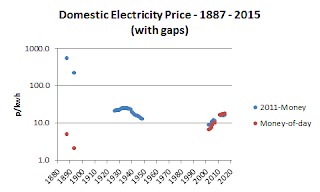